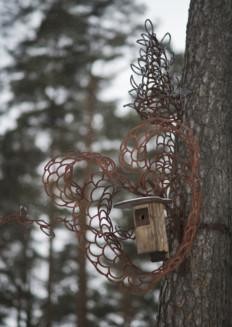 There are very few ITE artists who have achieved the respect, support and appreciation of their local community to the extent that the Savonlinna-based gravedigger Marko Ruuskanen has. The bird houses that Ruuskanen has made for the graveyards in Talvisalo and Kirkkoniemi are works of art that could be exhibited in museums with the best pieces of modern art.

Ruuskanen started creating his innovative bird houses in the 2010s. As Ruuskanen was making a standard bird house for the Talvisalo graveyard, the gardener there said that the roof could be even more curved. This comment was the moment of epiphany for Ruuskanen: he could do whatever he wanted, there were no restrictions. Ruuskanen’s first bird houses were made of plywood. Little by little more decorations appeared on the bird houses, and Ruuskanen introduced metal as a new material for them. He bends metal bars of various thickness and welds them together to create very impressive bird houses. Ruuskanen has also developed a mounting technique that allows him to hang the houses high up on trees.

Ruuskanen makes the bird houses mainly during the winter months as he thinks that there is too much light in the summer. He makes the houses in the parish premises early in the morning before he starts work. The bird houses have different themes, and eternity, love, and angels all communicate different ideas. The eternity-themed bird houses were inspired by a touching speech Ruuskanen heard at a funeral. There are several heart-shaped bird houses in the columbarium, because Ruuskanen thinks that this part of the graveyard is particularly full of grief. Ruuskanen wants to comfort mourning relatives with his bird houses. Some bird houses have been inspired by an especially sad death and can be placed on a special tree such as one near a child’s grave. Some people are aware of the fact that a bird house is specially made for their dead relative. There is also a bird house in Talvisalo that is Ruuskanen’s self-portrait.  The message of Ruuskanen’s works is the continuation of life: not so much an eternal life for the deceased but life going on for those who survive.

As a hobby, Ruuskanen has restored old untended gravestones and iron fences in graveyards in Savonlinna and the surrounding parishes since 1997. He has been rewarded for this work with the honorary title ‘Musta Pässi’ (the black ram) in 2008 as well as the Minnesvårdarna (memorial guardians) society scholarship in 2013. Ruuskanen has followed the restoration instructions for old tombs published by Finland’s National Board of Antiquities and has also sent practical tips back to the Board. 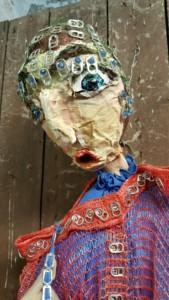 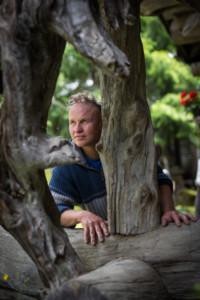 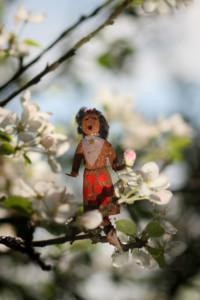