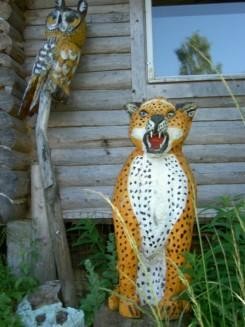 Childhood was not a time of happiness for Korpilahti based Timo Peltonen (1929-2007), who only discovered his parents as an adult. However, skilled in drawing and painting, he gained acceptance and encouragement early on.

Peltonen began making paintings with wartime lacquer paint during his years in a boys orphanage, but only took interest in sculpting as late as the 1980’s after retiring from his work as a lumberjack and railwayman. Peltonen first encountered wood sculpting at a chainsaw show in a hardware store. He visited the presenter of the show to learn and was heartened to sculpt on his own. Typical for chainsaw sculplting, Peltonen’s first sculpture was a bear.

There are several chainsaw sculpture artists in Finland, but it is the expressiveness and the joyful colouring of the forest people’s portraits that make the sculptures of Timo Peltonen cheerfully original. His animal figures are so expressive that they seem to mirror human characteristics. As if strait from the pages of a storybook, his bears especially are portrayed as gentle beady eyed teddybears. Peltonen has explained, that he wishes to make his sculptured animals pleasant, so that the viewer can also enjoy them. The attempt to replicate nature’s beauty is still in the background. As an experienced forager Peltonen sculpted and coloured many of the animals by recollection, having to only look up the wing patterns of butterflies for influence. Peltonen mostly immortalized animals from the Finnish forests, involving bears, rabbits, squirrels and different birds, but a few lushious human figures and an orange-yellow Panther, especially dear to the sculpturer, are also included in the sculpture cavalcade. 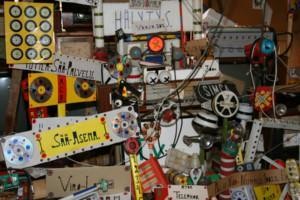 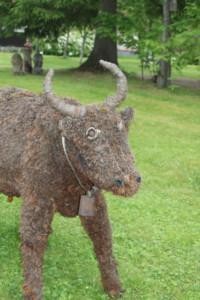 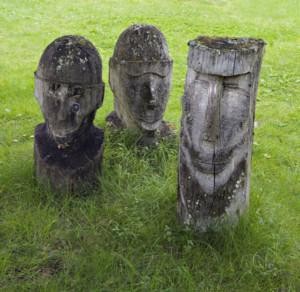