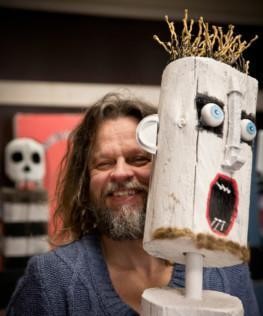 Jori Kalliola, who was named the 2021 ITE Artist of the year, is self-taught both as a musician and as an artist. He has always been a maverick, averse to authority. It took him a long time – decades – to find his singing voice and his voice in his art.

In his twenties, Kalliola moved from Rauma to Helsinki to become a singer in a rock band. Kalliola is now the lead singer of Jori Otsa & Mah’Orkka, a band that performs songs made famous by Georg Ots.

It was also in his twenties that Kalliola started painting. He sang with bands and worked as a groundsman in parks for ten years. He stopped making art for a long time when he became a father. It took decades to develop his individual expression in both his music and art. Something fell into place when Kalliola and his family moved from Helsinki to Hanko. There, he could afford a decent workshop, and the quiet small town allowed him to focus on the essentials: art and family life.

When some logs were left over from the family’s home renovation, Kalliola turned them into his first wooden sculptures. Kalliola uses recycled materials in his sculptures, such as bolts from dismantled railway tracks and leftover paints.

Kalliola’s workshop is full of colourful, grimacing wooden heads. There is more to the wooden sculptures than just the idea of entertaining viewers. The wooden people protest against injustice and rebel against the authorities. One of Kalliola’s paintings features a text saying that the lepers of the day are those who lack a competitive instinct. In addition to competitive society, his sculptures make comments on issues such as religion, civil war and social media.

Kalliola says that what he does is no longer about art but about a way of life: “I do what I want, and I don’t care how people react to it or whether people are interested in it or if they buy my art. Interestingly, when I got to an easier point in my life at which I no longer cared about anything, I received recognition. Nothing happened for as long as I tried hard to achieve something.” 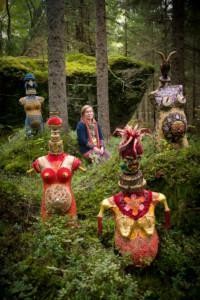 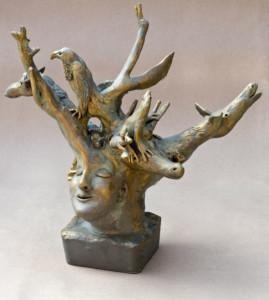 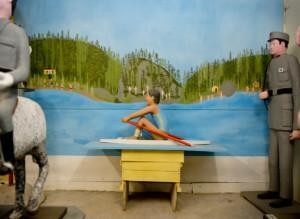 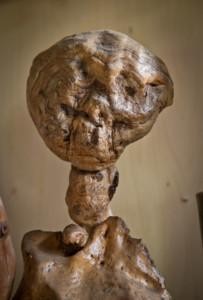