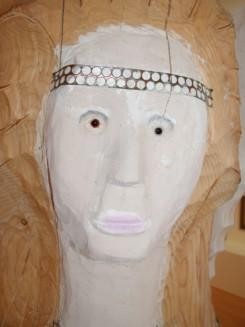 Väinö Oja started making sculptures with a chain-saw seriously only some ten years ago, but he has managed to create a great collection of large wooden statues and has become recognised in both Finnish and international ITE circles. Two of his little bird sculptures have even found their way to the famous abcd collection in France. Oja is a little surprised by this choice; he says that the birds are old – made before the sparkle of his creativity really took off – and that they are rough in their style and the material is rotten.

In general, Oja is astonished at his works’ popularity and says that it was only through the ITE exhibitions that he came to see how many interesting ways of art making and how much creativity there is in the world. “It’s not only those who have studied to be artists that get ideas”, he says. Oja shows respect for wood when he carves his pieces. According to him, a sculpture is pleasing to the eye when the beauty of the material and the maker’s hand are visible; that is why the grains and the technique must be obvious in the finished work. Sometimes a bird or a little mammal can be seen in the form of the twisted wood and only requires a light touch of the saw. When you fiddle with a piece of wood and begin to work it, it will reveal what is hidden inside. Oja is a productive and fast sculptor. “If you work too much on details, you lose the joy of carving, and it won’t improve the piece, either”, he explains of his method.

The woods surrounding Oja’s summer cottage hide numerous wooden birds and other carved animal figures. At exhibitions, his imposing bears and gorgeous beauties have drawn a lot of attention. Oja says these are, in fact, his favourite subjects: the bear because it looks friendly and is easy to produce with a chain-saw. Oja’s speciality as a bear sculptor is the bear’s wavy coat and his home-made wood-protecting mixtures. A mixture of tar and petrol applied on the surface of his statues gives them a warm brown colour and protects works which are left at the mercy of elements against decay. Oja makes female figures because he likes their forms. He sometimes decorates his erotic figures – which have long lashes, red lips and are in “Eve’s costume” – with ever-fresh artificial flowers. After treating the figures so that they become white-skinned, Oja makes them up lightly but seldom covers the entire beautiful wooden surface. 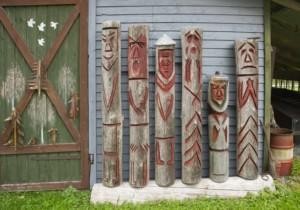 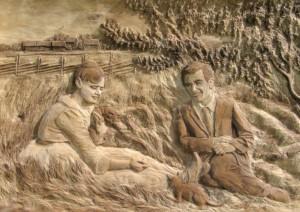 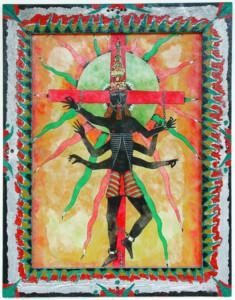 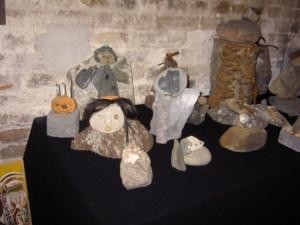