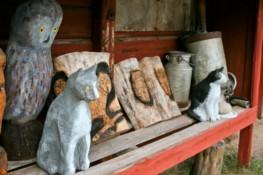 Pentti Sipola, who lives in Paavola, Siikajoki, uses waste wood from his own forest in his sculptures. He has never bought material for his pieces nor has he ever used saleable timber for his sculptures. He shows everyone that wood can be used for other purposes than planks, and trees that are not good enough for timber companies can take a more refined form than a mere pile of firewood. Sipola says that it is the utilisation of waste wood that makes sculpting so pleasing.

Sipola is a sculptor whose road to becoming a contemporary folk artist was “the usual”. He lives in the country, and cattle, farming and forest have always been his livelihood. When he was a young boy, a lack of drawing paper forced him to draw his pictures in the margins of newspapers. He started art-making in earnest with oil painting after gaining more spare time, having given up the cattle. He created his first chainsaw sculpture, a bear as is the tradition, on the spur of the moment. The creature looked so real that it fooled bear dogs that wandered into the garden into barking. Encouraged by the dogs, he continued to produce sculptures.

In the countryside, everyday creativity and innovation are a way of life. People try to make everything themselves or make do with old items as shops are far away. “Under those circumstances, you do what you have to do”, says Sipola, giving a few examples of the self-sufficiency of the backwoods. When he once suffered from a hernia, he made a truss from a lumberjack’s hearing protectors, which he attached to a wide belt. Real countrymen only go to see a doctor when there is absolutely no other alternative. When Sipola’s friend once dislocated his knee while they were sawing timber, Sipola was the one to fix it. It took a lot of hard pulling but the knee was put back into place and the men could continue working. “We do all sorts of things here in the backwoods”, Sipola says, laughing. 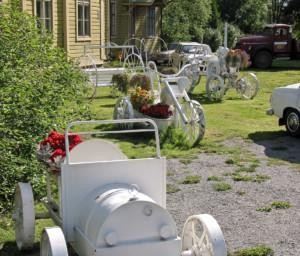 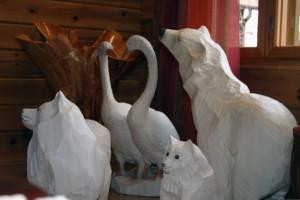 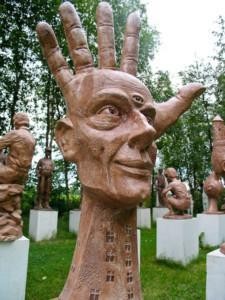 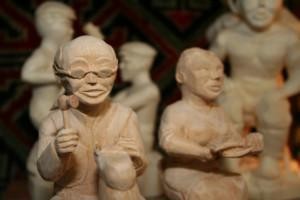