Juha Vanhanen’s White Wedge of Cranes spreads the word of equality of all human beings in front of their Creator.

Vanhanen is an amazing preacher who uses art, extremely conceptual art, as his sword of the Spirit. His works are striking, and they could have been made by some well-known conceptual artist. One can imagine seeing them, without Jesus, placed in the park of a modern art museum. The whiteness of the artworks represents redemption, distinct from the kingdom of darkness.

Juha Vanhanen’s way of preaching creates an interesting conflict, which has exceptional massiveness and humour. He collects used Mercedes cars as well because ‘mercedes’ is the Spanish for ‘mercy’. He paints his Mercs white and has them driving towards ‘hell’ in a line. This means that even though these cars are for the wealthy, there is still a chance of mercy if only people are smart enough to jump out at the last second and to trade them for, say, Minis. Thus Vanhanen teaches people to change from the primrose lane to the straight and narrow one without any denial of life. 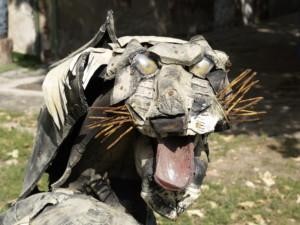