Erkki Rytkönen, a wood sculptor from Iisalmi, is a retired health and safety inspector, but judging by his numerous woodcarving works, commissions and awards, he is especially well-known as a versatile wood artist.

Rytkönen’s artistic production has its roots in his childhood, when he learned to carve wood with his brother while they were taking cows to pasture. Rytkönen says that a favourite thing to sculpt was a woodpecker carved from a piece of alder with a branch. The branch became the bird’s beak so it was easy to attach the woodpeckers to trees by their beaks. It must have been easy to follow the brothers’ route as almost every tree along the path had a woodpecker.

Rytkönen made his first chainsaw sculpture, a mating capercaillie, in 1968 when he was helping his father on a logging site. He became an eager chainsaw sculptor in the late 1970s, and since then he has made outdoor sculptures for people across Finland and overseas. Several of his works are also on display in public places.

Rytkönen has taken part in numerous chainsaw performances and various competitions, winning two Finnish championships and several prizes. He has also been invited to perform, twice in Germany and once in France and Norway. Rytkönen’s works have also featured at several exhibitions, e.g. the Miraculous House of Fun and Pleasure exhibition of ITE artists in Ilomantsi in summer 2021, and he was also a member of the jury of the Bear Sculpting Championships.

Wood sculpting seems to be a big part of Rytkönen’s life. The residential and studio space that he built in Koljonvirta, Iisalmi, in 1998 is the perfect place to make art. Rytkönen says that the impressive building is made of old pine from Kostomuksha, Russia. The trees were sawn and the logs were lifted on top of each other by hand in the traditional way. The walls were squared on both sides and linen was used for insulation.

Rytkönen’s most common commissions involve sculpting tree stumps in people’s gardens. If a stump is high enough, it can be used to carve a bear, for example. Rytkönen is also a great storyteller. The story goes that the form of his sculpture of Venus gradually emerged from the sensual collaboration between the wood and the sculptor.

Rytkönen is a skilled sculptor and has an endless number of stories about wood sculpting, and it is great that he also passes these on. Jari Kuokkanen, who got to know Rytkönen as a tutor, is now a fellow sculptor, and the two men work together on joint sculpture projects and commissioned work. 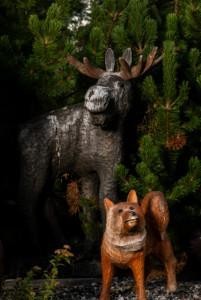 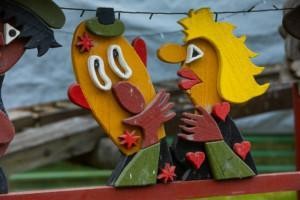