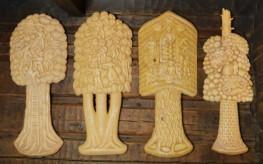 Veikko Saastamoinen was only 13 when he became the nominal owner of the Sormula farm, an event that also decided his future as a farmer.

The family has kept Saastamoinen’s wartime notebooks in which he wrote poems and short stories, and in the 1940s and 1950s, he also wrote plays and humorous articles. He was asked to write a weekly column for the Savon Sanomat newspaper, but he could not spare the time from his duties at the farm.

Saastamoinen took notice of the extraordinary shapes of trees and burls even as a young man. He started working wood during the war, making various boxes in his free time.

He made his first sculptures and reliefs of wood in the late 1960s, inspired by the wooden works of art by Aarne Paldanius and Eva Ryynänen that he saw sat the Peltosalmi agricultural show. His urge to create was powerful.

Saastamoinen would make a rough form of a work outdoors, using an axe, never a chainsaw or other mechanical means. He then finished the work in front of the stove in the farmhouse. His works were exhibited for the first time at the Kuopio regional art exhibition in 1974.

The grapevine and the quality of Saastamoinen’s works were their best marketing tools, and soon there were so many commissions that it was hard for him to keep up. One significant buyer was the municipality of Keitele, which commissioned him to make the awards it presented to entrepreneurs for ten years, and also bought works that were placed in the municipal offices, the library and the healthcare centre and were also given as gifts.

Saastamoinen used various tree species, stumps and burl in his works, though his favourite material was old pine as it was easy to work with. Sometimes he simply ‘gave a helping hand’ to a piece of wood that had been shaped by nature.

Saastamoinen finished some of his works with wood stain or varnish. Sometimes he stained his works in the sauna, and he also used a soldering iron to create details.

Saastamoinen named all his works, and they are often observations about topical issues. Examples include Emigration, the Opec meeting and Breadline. Nuclear radiation, a work from 1986 that is almost two metres tall, is a comment on the Chernobyl nuclear power plant disaster.

Saastamoinen had to give up making art as his health deteriorated. Death is present in the series of four works, A man’s life, from 1989 and the relief On the last shore, from 1995.

Veikko Saastamoinen was one of the founders of the local wood artists’ association, Savolaiset Puutaiteilijat, and he was also a member of its board several times. He was made an honorary member in 1993.

Saastamoinen’s enormous body of works has never been catalogued, but it is estimated that he created almost a thousand works. Sirpa Tyni, Saastamoinen’s daughter, tends to his art collection, and exhibitions of his works continue to be organised.