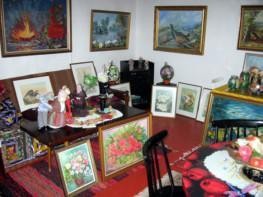 Martta Korhonen was born April 2.,1913 in Polvijärvi, North Karelia, to Iida and Kusti Pajarinen’s smallholder family of 12, in the autonomic Finland under the Russian Empire. As the third oldest of the siblings, Korhonen had to take responsability of the care of the younger siblings and the house chores, early on.

Korhonen appreciated hard work and was bold and effective by nature. ”I’ve worked my share, I’ve learned to work, so that I don’t have to think that work isn’t suitable for humans”, she stated laughing.

For the majority of her working life, Korhonen held a market garden in her court yard in Outokumpu. She was nicknamed pleasingly as Flower-Martta, suiting in the light of her paintings, with varied floral themes.

At the age of 60, Martta Korhonen began painting in around 1972. The interest to paint must have been great, since despite the quantity of other work, she managed to paint while running the market garden. Korhonen reminisced: ”Even then I stroked with my brush, and with haste. Though I had so much work, even then I painted”.

Besides oil colours, Korhonen used several other techniques for paintings: different coloured pencils, regural pencils, crayons and charcoal. She mixed various techniques, for example by painting with oil colours on top of a drawing made with coloured pencils. Framing the pictures was also essential. ”Without a frame the picture doesn’t look like much”, Korhonen notes.

Diverse themes can be classified from the works of Korhonen, for instance, scenery, flowers, animals as well as depictions of old times. Korhonen drew her themes from her imagination, along with, from the flowers in her garden, postcards, photographs and animals seen on television. In addition to exotic fish and polar bears, homely cows, horses, bears and birds appear in her paintings.

As material for her artwork, Korhonen made varied use of all kinds of ”recycled materials”, such as bottle caps, mustard tubes, lids of cat food cans, plastic honey jars, nylon socks, fat cakes for birds, paper, coffee packets and stones.

Perhaps the single most describing thing about Korhonen and her art, is swiftness. Korhonen was not only swift in her work, but also very productive. On the other hand, she was productive precisely because of her swiftness. She believes to have painted several hundreds of pictures. ”I’m a sort of an on-the-spot-doer… I’m an impatient character, which comes from the work. I’m a very prolific person.”

Flower-Martta valued her ability to work and her brisk nature, with which she got along in life without giving into misfortune. Humour glimpses in the artistic works of Korhonen, and she too emphasized the importance of a good sense of humour as a characteristic. All in all, an image of positive attitude, personality and able-bodiedness forms of Flower-Martta. 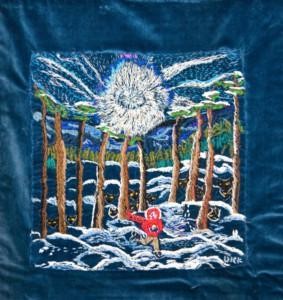 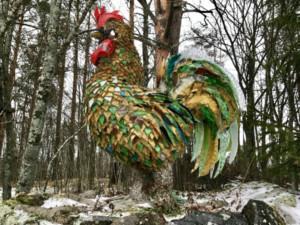 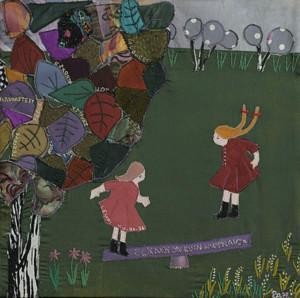