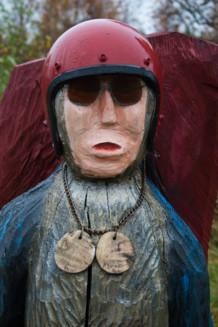 Eero Leinonen’s energy workshop, behind and amid the northern marshes, offers an antidote to Europeanisation. After the master of grinning totems got an allergy to printing ink and retired to a disability pension from delivering newspapers, he was able to attack Russian pinewood with an axe and an angle grinder. Giant pine trees from across the border mould like wax in his hands to become incredible totems, which now stand in his back garden. With a contented smile on his face, the codger displays his lumpy trunk statues wearing an orange work coat, which blends in with the already fading autumn colours.

Every piece is made of timber, except Milk to Brussels, which comprises an unemployed milk churn with the Finnish cross on the side, bawling: “the countryside has been seduced”. There is a statue of the former Finnish Prime Minister, Lipponen, as a bailiff standing at the far end of the field, smiling enigmatically. On the other side, on a large stone under a fir tree, a red fox sheds endless resin tears. Leinonen has carved, as a counterpressure to the inevitable, The Beer Tycoon, who has a gnarled hat, a face tanned by too much booze and “a prick worn to nearly nothing”. In his wooden pocket the geezer carries a wooden bottle.

Leinonen’s works have “an added Lapland value”, i.e. they take a very positive stand on life’s animalistic nature. He lets out the kind of overwhelming laughter that forces beliefs back inside and entrails onto the table. Snakes eat Eve’s head while Adam, scared stiff, holds on to his penis. Each figure has its own place in Leinonen’s back meadow gallery, which is the map to his soul. It is a deep forest and concrete dream. When an eagle shaves a bear’s head, it is like a war between the earth and air. A salmon leaps from the foams of water with its side stuck in a tree. Nature completes ITE art, which is shown by the lichen scales growing on the salmon. Leinonen’s Bear Hunter stood beside the medieval village at Kierikki Stone Age Centre’s summer exhibition in 2007. It seemed it had always been there. 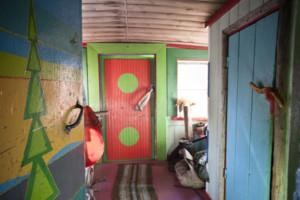 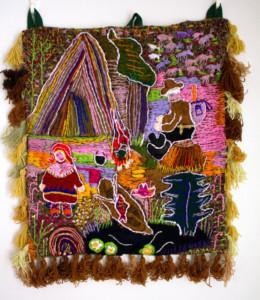 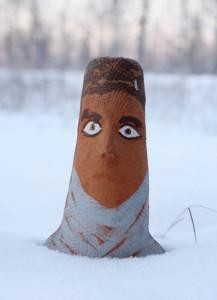 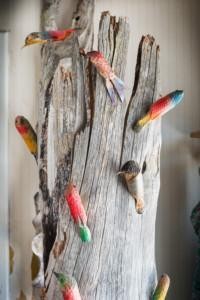