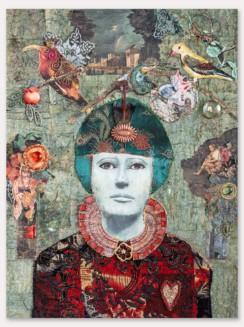 Pirkko Toiviainen from Rautalampi works with recycled materials to create colourful multi-layered collages, assemblages and installations. The base of her works can be objects such as book covers, paintings, ironing boards, shoes, bags, toys, chairs, mirrors, dishes, decorative objects and burls. The classic image of a face is the starting point for many of her works.

The artist name Anna WildRose dates back to the time when Toiviainen lived in Helsinki and, in 1999, after recovering from severe depression, opened a small arts and crafts shop. The shop was significant for her artmaking but it did not guarantee her livelihood.

A couple of years later, Toiviainen returned to her roots in Kerkonkoski, Rautalampi.

Pirkko Toiviainen set up a collage workshop in the early 2000s, which has attracted thousands of visitors from Finland and the Baltic countries. She has also run workshops to accompany her art exhibitions, in schools and at various cultural events, and her workshops are well-known in the field of ITE art.

Because she uses recycled materials, time is always an integral part of Anna WildRose’s works and workshops. Some works are prophetic, such as the series of small collages, the Trumputins, that she started working on in 2014. Trump dances as Putin’s puppet and sits nicely as Putin’s lapdog; a warship sinks and Putin walks across a destroyed landscape. The presidents, full of bravado, become smaller by the piece.

Pirkko Toiviainen is a versatile artist. She composed and wrote songs in the 1980s that she performed with her then partner. Musicians Jesi Blomgren, Seija Hurskainen and Aki Virta recorded the songs in an album that was released in October 2022. Toiviainen’s songs have also been performed at her musical art exhibition, which brings her life, art and music together.

Toiviainen is happy to elaborate on some of her works – what she wanted to achieve or what she only later understood to have been trying to work on. It is the viewers who have the ultimate pleasure of discovery. If they take their time, they may see an individual element in a work that opens up new personal views or meanings.

Toiviainen set up her Rose Gallery in 2008, in which she has held an exhibition almost every summer ever since.